William H. Johnson (ca. 1835 - January 28, 1864), also called Will, was a close friend of Abraham Lincoln and assisted him in killing the Vampires. He also became Abraham's personal valet.

Abraham, as a child, saved Will from being beaten, but Will also garnered a scar across his face from a whip.

Will walked into a convenience store and had spotted Abraham reading. He has been looking for a lawyer since he escaped from the South and people were looking for him.

Between 1864 and 1865, Will assisted Abe in the White House and to fight back against the vampires. He fights the Vampires off on a train and survives the ordeal, along with Abraham and Henry. 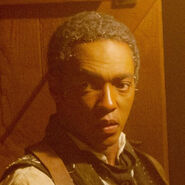