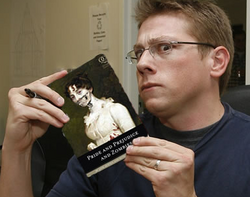 Seth Grahame-Smith is an American best-selling author, screenwriter, and producer of film and television. He is best known as the author of The New York Times best-selling novels Pride and Prejudice and Zombies and Abraham Lincoln, Vampire Hunter, both of which are being adapted as feature films. Grahame-Smith is also the co-creator, head writer and executive producer of The Hard Times of RJ Berger, a scripted television comedy appearing on MTV. In collaboration with David Katzenberg, his partner in Katzsmith Productions, Grahame-Smith is currently developing a number of projects for television and film. [1]