Abraham Lincoln: Vampire Hunter is a 2012 film based on the historical fiction novel by Seth Grahame-Smith. The film was released in theaters on June 22nd, 2012. It's being released on DVD/Blu-ray on October 23rd, 2012.

In 1818, Abraham Lincoln lives in Indiana with his parents, Nancy (Robin McLeavy) and Thomas (Joseph Mawle), who works at a plantation owned by Jack Barts (Marton Csokas). There, Lincoln intervenes when he sees his friend, a young African American boy, William Johnson, being beaten by a slaver. Because of Lincoln's actions, Thomas is fired by Barts, who demands that Thomas pays his debts to him. When Thomas refuses, Barts warns him that there are more than one way to collect a debt. That night, Lincoln sees Barts breaking into his house and attacking Nancy. Thomas finds her ill the following day, and she dies shortly afterwards. He blames Barts, and tells Lincoln that he poisoned Nancy. Not long after, Thomas dies as well.

Nine years later, Lincoln (Benjamin Walker) decides to get revenge against Barts. He attacks Barts at the docks, but Barts overpowers him, revealing himself to be a vampire. However, before being killed by Barts, Lincoln is rescued by a man called Henry Sturges (Dominic Cooper), who takes Lincoln to his mansion. There, Sturges reveals that vampires exist, and offers to teach Lincoln how to become a vampire hunter. Lincoln accepts, and, after 10 years of training, travels to Springfield, Illinois, in 1837, where he begins to slay vampires. During his training, Lincoln is told by Sturges that the vampires that live in America descend from Adam (Rufus Sewell), a powerful vampire who owns a plantation in New Orleans with his sister, Vadoma (Erin Wasson). Lincoln also learns that vampires often feed off of the slaves.

In Springfield, Lincoln befriends shopkeeper Joshua Speed (Jimmi Simpson), and falls in love with Mary Todd (Mary Elizabeth Winstead), who is also being courted by a local political, Stephen A. Douglas (Alan Tudyk). Barts is one of the vampires living in Springfield, and, upon learning of Lincoln's presence, he begins to target Mary.

One day, Lincoln receives a visit from Johnson (Anthony Mackie), who now helps freed slaves to escape through the Underground Railroad. Johnson asks for Lincoln's help to evade bounty hunters who were hired to eliminate him. Lincoln and Johnson defeat the bounty hunters, and Lincoln later tells Mary what happened. She encourages him to fight for his ideals, and Lincoln begins to speak against slavery. Sturges visits him, and says that he needs to focus on his mission. Sturgess then provides Lincoln with Barts' location.

Lincoln confronts Barts at a farm, where Barts is mortally wounded. Before dying, Barts reveals that Sturges is a vampire as well. Lincoln confronts Sturges, who reveals that, several years before, him and his girlfriend were attacked by Adam, who bit them both. Because Sturges' soul wasn't pure, he became a vampire, and that prevented him from harming his "creator" or any other vampire since as Adam stated, "Only the living can kill the dead". Since then, Sturges has been training vampire hunters in an effort to destroy Adam.

Lincoln, disappointed, decides to abandon his mission. However, Adam learns of his activities and captures Johnson in order to lure Lincoln into a trap at his plantation in New Orleans. Lincoln tells Speed the truth and they travel to Adam's estate, where Lincoln is captured. However, Speed storms into the mansion and rescues Lincoln and Johnson, and the three escape back to Ohio.

There, Lincoln marries Mary and hires Speed as his assistant and Johnson as his valet, allowing Johnson to continue his duties with the Underground Railroad undercover. Sturges warns Lincoln that slaves are what keeps vampires under control, and if Lincoln interferes with that, there'll be an uprising, but Lincoln ignores his warnings.

Lincoln defeats Douglas and is elected President of the United States of America. He signs the Emancipation Proclamation and moves to the White House with Mary, where they have a son, William Wallace Lincoln (Cameron M. Brown). Years later, in 1861, Willie is bitten by Vadoma. Sturges offers to turn Willie into a vampire in order to save him, and although Mary wants him to, Lincoln stops him. Following their son's death, Lincoln is blamed by his wife.

With the slaves freed, the vampires begin to attack all humans. Lincoln deploys his troops to confront the vampires, but the monsters gain the upper hand because of their supernatural powers. Sturges tries to convince Lincoln to offer Adam a truce, but Lincoln refuses, and is informed that Adam's army has repelled Lincoln's forces in the Battle of Gettysburg. Lincoln then decides to confiscate all the silverware of the area and have it melted in order to produce silver bullets for the soldiers to use in the battlefield. Speed, believing that Lincoln will lead them to death, betrays him and informs Adam that Lincoln will transport the silver to Gettysburg in a train.

Adam and Vadoma watch as Lincoln reconciles with Mary, who lives with the other slaves, and follow him to the train. Lincoln, Sturges and Johnson fight Adam, Vadoma and other vampires, who have set a fire a few miles ahead while Speed damages the train's controls, hoping that it will crash against the fire and destroy the vampires. Adam kills Speed and fights Lincoln before being attacked by Sturges. During the fight, Adam learns that there is no silver in the train, only rocks. Lincoln reveals that he lured Adam into a trap and stabs Adam with a silver knife that Sturges had given him. Lincoln, Johnson and Sturges then jump out of the train before it explodes.

Adam dies, but Vadoma escapes, and locates Mary, who had transported the silver to Gettysburg through the Underground Railroad. Vadoma tries to kill Mary there, but Mary kills Vadoma first, using a rifle to shoot the silver toy sword of her deceased son, into Vadoma's forehead.

A few months later, on April 14, 1865, Sturges congratulates Lincoln, revealing that the few remaining vampires have fled to other countries, and tries to convince Lincoln to allow him to turn Lincoln into a vampire, so Lincoln will become immortal and continue to help Sturges to accomplish great things in the future. Lincoln refuses, and leaves for Ford Theater with Mary, leaving Sturges behind.

Over a century later, in modern times, Sturges locates a young man at a bar in Washington, D.C. and approaches him in the same way he once approached Lincoln, revealing that he's still alive and training vampire hunters. 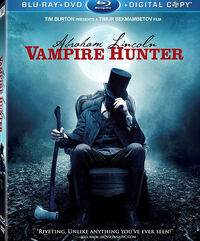 Abraham Lincoln: Vampire Hunter will be released on Blu-ray and DVD Oct. 23.

There was a New York Comic Con panel with acclaimed Content Director/Producer Javier Soto, Key Concept Artist Nimit Malavia, and Animation Director Matt Whelan as they previewed and discussed the amazing animated graphic novel, The Great Calamity, which will be exclusive to the upcoming Blu-ray release. 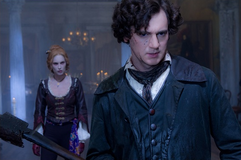 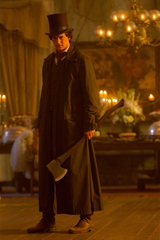 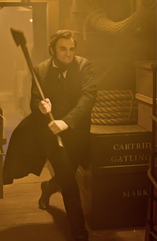 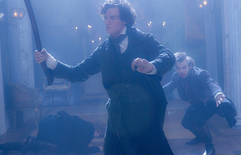 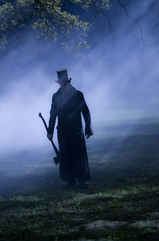 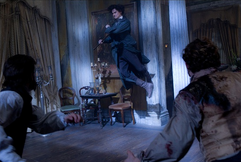 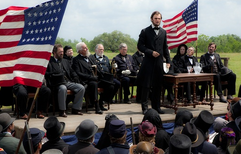 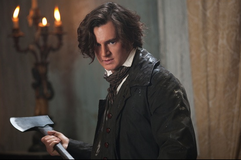 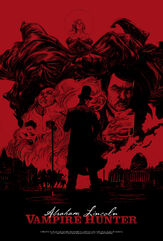 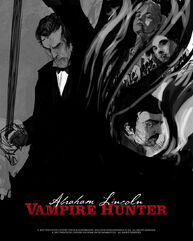 The soundtrack to Abraham Lincoln: Vampire Hunter as composed by Henry Jackman was released digitally on June 12, 2012 and set to be released physically on July 3, 2012. In addition, Linkin Park's song "Powerless", from their 2012 album Living Things premiered in the official trailer to Abraham Lincoln and was the first song to be played over the closing credits, followed by "The Rampant Hunter". However, the song was not featured in the US soundtrack, but still the song was released as a single under the name of soundtrack in Japan.

Many have wondered why the unofficial Sessions album, only available via a special antenna, is three times the length of the US / UK album.